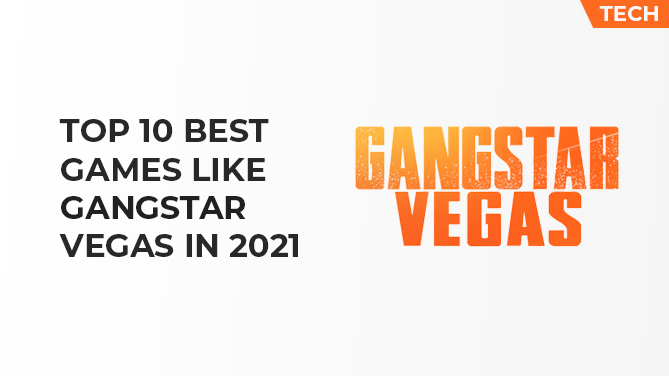 Gangstar Vegas developed by Gameloft Montreal is an open-world action game inspired by GTA Vice City and is designed for mobile devices. It’s the sixth installment in the Gangstar series and is commercially successful, being downloaded over 100 million times on Android and iOS.

The game’s 3D graphics and music are what it is praised for. However, it is criticized for laggy experience and frequent software updates.

Below is the list of best games like Gangstar Vegas. Keep scrolling to get your hands on the best one you feel.

Gangstar New Orleans is the most recent and sixth one of the open-world action-adventure games from Gameloft. It is a sequel to Gangstar Vegas and takes up space 3 times less than Gangstar Vegas-800MB. You will find not much change in the gameplay though it’s beautifully designed and details are very clear on a small screen with moderate graphics.

Gangstar New Orleans offers unique vehicles and attire and missions which are short yet challenging. You can play in mayhem mode to simply pass time or in a career.  The whole city is divided into several sections which you go through by maps.

One can download it from the play store or app store and it also has in-app purchases to progress faster.

Just Cause 3 is a pure sandbox and open-world game developed by Avalanche Studios. This game’s really good and fun to play. Rico Rodriguez is the protagonist and this time he will be destroying the dictatorship in Medici controlled by Sebastiano Di Ravello.

The explosions and the fireworks displayed are just amazing. When one blows something, the smoke, debris are massive. It has a simplistic design and amusing physics background and is good enough if you want a simple action game for an hour or 2 every other day.

One can choose from a huge variety of vehicles like helicopters, turbo fuelled sport cars, etc. You can enjoy the game on PS4, Xbox, or Microsoft Windows.

Mafia 2 is old but worth playing and a beautiful one among games like Gangstar Vegas. The setting, story, gameplay, and immersion are stunning. Yes, there’s a little too much combat and it’s glitchy though.

It’s played with a third-person perspective and is based in the fictional city Empire bay. The protagonist Vito Scaletta, while paying his father’s debt, is trapped among mafia crime families to lead a secure and prosperous life. There are over 50 vehicles and music from the 1950s era.

It gained mixed reviews, mostly positive though. It was criticized for lack of features and world design. However, despite what it lacks it’s still a great game, and of course, you will be disappointed if you compare it with GTA.

Now this one is popular. Grand Theft Auto: San Andreas- developed by Rockstar North is an adventure-packed game and is deemed one of the tremendous and best-selling video games of all time. Followed by Grand Theft Auto Vice city it is the seventh game.

The plot is heavily based on real-life incidents in Los Angeles in the 1990s. It’s loved for its music, gameplay, and story and has to improve its graphics and controls. You can operate a variety of vehicles and move around in a large open-world environment. And can personalize the main protagonist by adding role-playing elements.

The game includes customization options for clothing and vehicles, RPG style mechanics, gamblings, real-life elements, etc.. all that you are gonna like.

Now in our list of games like Gangstar Vegas, we have Hitman. It’s developed by Danish developer IO interactive and is a stealth video game. You can play it on multiple consoles, windows, Linux, or macOS.

It’s based on a semi-open world environment and is a third-person viewpoint. Players should disguise, or hide using suppressed weapons and kill or eliminate specific targets remaining stealthy and the main protagonist here is Agent 47.

Because of its unique stealth gameplay, it’s got relatively positive reviews. You can also go for Hitman 3 which is the most recent one in this series and is also the ultimate good one.

Grand Gangsters 3D is yet another one among games like Gangstar Vegas. It’s an open-world action-adventure game with motor vehicle theft.

You can take up 6 different motor vehicle theft missions and either obey the traffic lights or outrun the police.

Grand Gangsters 3D offers 15+ weapons and auto vehicles and tons of missions in around 4 areas of the city. Get ready to steal auto cars, shoot down other gangs, evade police, etc.

Now this one- Grand Theft Auto Vice City is the fourth one in the grand theft auto series and is developed by Rockstar North. It was again a best-selling video game in 2002 and earned numerous accolades.

It’s a third-person perspective game and the player controls Tommy Vercetti- a criminal completing missions and objectives. You can roam the open-world environment that is quite larger that has two islands and many smaller areas. You can unlock these islands as the story progresses. It’s simply an awesome game and you will love the fun activities and missions.

Okay, I like Batman and indeed had to include this one. It’s also worth it though. This is another action-adventure game and is certainly among the best games like Gangstar Vegas.

It’s the second installment and is a sequel to Batman: Arkham Asylum. The combat, detective, and stealth abilities of Batman are primarily focused here along with gadgets to use in combat. Its soundtrack, character, and narrative are all super good.

You will get some gadgets in the beginning and others are available later on in the gameplay like a cryptographic sequencer, line launcher, etc. The game has a lot more things to uncover, so start playing and feel like batman.

Grand Theft Auto V is another great action-adventure after GTA 4 and is set in San Andreas. It’s in fact the best game made by this developer. The game gives you enough freedom to explore its world and the story is holding and thrilling.

It has three main protagonists- Michael, Franklin and Trevor and they are the ones who give you big laughs and great moments.

A variety of games, customized clothes and vehicles, better driving, hunting, gambling, and many more is what GTA 5 offers. The graphics, gameplay, everything is amazingly captivating.

Now, this is another nice game in our list of best games like Gangstar Vegas. Ravensword Shadowlands is a sequel to Ravensword the Fallen King and is developed by Crescent Moon Games.

It’s an open-world role-playing game and you play the role of a soldier who survived against dark elves and then you move to discover why you survived, kinda adventurous. It has tons of enemy types and prehistoric creatures.

Ravensword Shadowlands has decent graphics and is a good one though has the potential to improve. However, it is enjoyable.

11. Enslaved: Odyssey To The West

And our 11th spot has enslaved: odyssey to the west which is another great one if you are looking for games like Gangstar Vegas. It’s developed by Ninja Theory set 150 years ahead in the future post-apocalypse due to a world war. The game is based on “Journey to the West”, a classic Chinese novel.

It will engage in puzzles and performing challenges and is a third-person perspective game where you are the monkey and are accompanied by a tech-savvy partner.

Watch Dogs: Legion is one of the best games like Gangstar Vegas and is a sequel to watch dogs 2, developed by Ubisoft Toronto. The game is set in the UK and you will see the whole of London and there’s no need to build up or open new areas.

Various drones, a handy spider bot, a robot, and an invisibility cloak are some impressive gadgets to build up points and take on enemies. Also, you have a broad range of characters to choose from and also share your equipment with others. Overall the game is quite decent and fun to play.

Now Saints Row IV is an incredibly fun-to-play game and certainly is one of the best games like Gangstar Vegas. It is developed by Volition and is the 4th one in the Saints Row series.

The player or the main character receives superpowers that let them improve their jump height, run faster, etc, and is the president of the United States. There are a large diversity of vehicles and weapons to play with and move ahead. It’s praised for humor and customization options and has likable reviews.

We hope you found your game if you are looking for games like Gangstar Vegas. Let us discern if you know any more good games and also which one is your favorite!