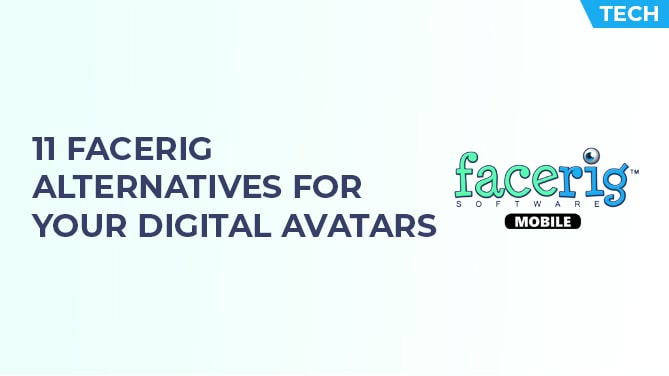 Animations are super fun and they are used in various aspects of different fields. Facerig is certainly one of the best animation software available with its great features like instant digital cosplay, real-time voice processing, variety of characters and backgrounds to choose from or make our own stuff, and stunning render quality, and all the customization it provides.

Nonetheless, other software or Facerig Alternatives are also worth checking out, and hence in this article, we have listed the 11 best FaceRig Alternatives that you can consider if you are looking for alternatives.

Below are the best handpicked Facerig Alternatives. Go through all of them and get your hands on the best one.

F Clone was founded in the year 2017 and is our first one among Facerig Alternatives. This is one of the best ones to create your digital avatar. Facial expressions and movements are captured in real-time with the world’s 1st cutting-edge technology that F Clone offers. Everything is recorded in real-time and you just need a webcam to get your markerless facial motion capture.

It is fully compatible with Motionbuilder, Blender, Autodesk Maya, and a few more. F Clone has brought in 3D transformation, facial muscle movement, smoothing, removed noise data, etc. It has 21 pre-installed characters and 17 background videos to record your 3DCG videos in real-time.

Like F Clone in Facerig Alternatives, Crazy Talk is also a popular software for facial animations or to make your digital avatars.

Features of the crazy talk include stylized avatars from 3D tools, avatars that talk, 3D head creation that is highly accurate, life-like animation from audio, auto lip-sync from recorded files or VAV, and you can also see puppeteer expressions with mouse movements.

You can make fun animated video albums, transform your art into life-like characters, maybe for some comic story, or simply turn any image into an animated character.

Another real-time 3D animation software in the list of Facerig Alternatives is iClone. Well, iClone boasts that it is the fastest and easiest to use software to create your animations whether it is for content development, movies, previz, films, video games, or art. It does everything with grace and helps you make your best-animated characters.

Muvizu is another powerful and easy-to-use software in this list of Facerig Alternatives. It’s one of the best ways to tell your stories in the form of animations and muvizu does it gracefully.

Auto lip-syncing, animation libraries, real-time illumination system, rapid rendering, super-fast controls are some of its features that will let you create compelling animations in minutes.

Storytellers, animators, businesses, and even in education- teachers use widely to let students comprehend precisely. Muvizu is all over the world for engaging and delighting animations.

There’s a free trial available or buy muvizu at $69.99

Now, FaceFX is the leading animation software in the video game industry. What can you do with FaceFX? With custom slider setups animate intuitively, interactive targets with face graph, curve editor, phoneme bar to edit with perfection, and much more.

Moreover, if it’s only the audio file you have and nothing else, you can get your 3D characters talking.

You can opt for FaceFX no save evaluation or purchase the professional version at $899.

Now split cam provides cool webcam features for all your video chats with your friends and is also a live video streaming software that streams to IMs and video services.

Some of its features include cool webcam effects with positive emotions, video splitting to several applications that work with various programs, realistic 3D masks or objects like elephants, or maybe movie character Darth Vader that replaces your head with it.

Toronto-based SideFX developed Houdini, a 3D animation software. It is generally used by people involved in games and films. So, what Houdini offers is, modeling, animation with motion capture support, all kinds of lighting in an IPR viewer, rendering, can also plugin libraries, volumetrics like clouds, smoke or fire, and other major things in 3D animation.

Now comes blender, and this one’s an absolutely free and open-source 3D creation software. Blender is certainly one of the best options in this list of Facerig Alternatives.

Professional artists, VFX experts, scientists, hobbyists, individual artists all use blender and contribute to it. It supports 3D pipeline- animation, rigging, simulation, rendering, compositing, motion tracking, modeling, and a few more. Its interface is pretty cool and easy. Make it your own with its creating new add-ons layouts, colors, and with a lot more stuff.

Now comes LightWave3D which is also a great one among Facerig Alternatives and you should definitely check this one as it is affordable, fast, easy, and a completely good one for the independent artists who want to do everything with perfect visions and control everything themselves.

LightWave3D has a free trial for 30 days or bit any one of its versions for more features. With the kind of power and efficiency, LightWave3D gives you can create a stable and effective workflow.

Well now we have Animation Master and the name itself says its function and yes this one’s also a good Facerig Alternative. It lets you create awesome stuff and bring in amazing imagery and animation from the comfort of your home or even kitchen.

There’s also an Animation Master forum where it’s experts help and guide beginners with lots of tutorials to kick start their journey as an animator. It’s kinda real good and brings to life any kind of project whether illustration, manga or special effects.

Moreover, it says its patches and hash splines are more versatile for control of your model than the polygons that are used in 3D software.

And here’s Plotagon in our list of Facerig Alternatives. Plotagon has apps for desktop as well as mobile. Well with Plotagon you gonna turn your text stories into films with animated characters.

You can create characters who can be your friends or anyone or you to act in the film and let the character speak i.e, record your voice and add music and sound effects to it making it more interesting. Also, Plotagon is an award-winning storytelling tool for all ages, and yeah it’s certain as it says animation studio is in the palm of your hands.

We listed some of the best animation software or Facerig Alternatives that you can no doubt check and explore to create some amazing animated stuff.

Hope you found the article helpful, also let us know if you know any more good Facerig Alternatives or any questions you have in the comment section below.