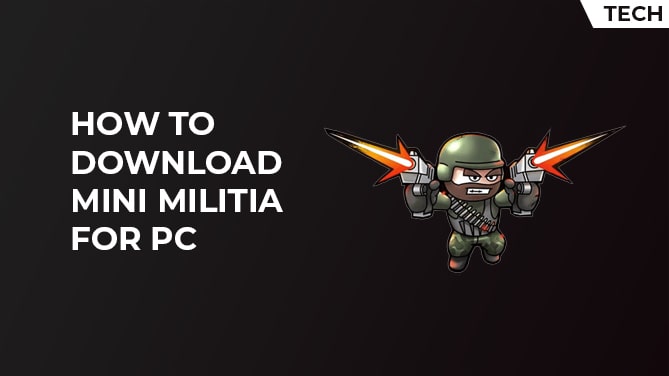 Developed by miniclip.com, Mini Militia has got enormous popularity. The game is incredible, unique yet is simple, and takes you into the realm of intense combat. You can play this game online and offline as well.

There are three offline modes- training, survival, and coop mode that will captivate you for hours. Though being a casual shooter game it’s still addictive enough and also fun.

Around 6 players can play online and 12 on a WiFi network. It has a broad selection of weapons like flamethrowers, grenades, sniper rifles, etc to select from that fits your unique style of gameplay. The game’s graphics and animations are super endearing and if you don’t want halo-style games Mini Militia is a good choice.

Therefore, in this article, we have explained methods by which you can get Mini Militia for PC. Although, I guess you will have the minimum system requirements to install Mini Militia; still have a quick look below.

As we now know that developers of Mini Militia have not released a standalone executable file, it has no Windows or Mac version. So, we will require an Android emulator to install Mini Militia for PC.

Not only Mini Militia, but you can also download any android application on your PC with the help of emulators. They create a virtual environment to run these applications.

Next are the 2 methods that use emulators. You can choose any method that satisfies you best. Simply follow the steps and get into your intense world of combat.

1. Mini Militia For PC With BlueStacks

If you already have the BlueStacks emulator on your PC, you can install Mini Militia from here. If not, you can follow the steps to install BlueStacks and then Mini Militia.

Alternatively, if you have Mini Militia’s APK file, you can import it to BlueStacks and install the game.

2. Mini Militia For PC Without BlueStacks

If you do not want to install BlueStacks on your PC, there are other considerable emulators like Nox App Player, Memuplay, LD player, Andy, or iPadian. These are some popular and best Android emulators other than BlueStacks.

Let us now see how we can install Mini Militia for PC using Memuplay.

Memuplay is exclusively designed for games and has gotten attention recently. It’s flexible, fast and another best emulator to get Mini Militia for PC.

Okay, now that you have installed Mini Militia for PC, you may want to know how to set your keyboard control settings to play your game efficiently.

Following are the steps to set keyboard controls, and begin playing.

You can now play the game comfortably knowing all the controls.

Playing Mini Militia on PC will certainly give you an upper hand over players who play on a smartphone because,

Doodle Army 2- Mini Militia has gained popularity in recent times and people are loving it and also wish to play Mini Militia on PC for the best experience but there isn’t a version available right now. So, the above-discussed methods work perfectly fine and let you have Mini Militia for PC with better controls and gameplay.

Also, using emulators is the only valid way to install Mini Militia for PC and you might have come across sites that give you links to download or say they have a PC version of it. As always, we advise you to stay away from those sites.

Hope you found the article beneficial, and let us know if you have any questions regarding the same.