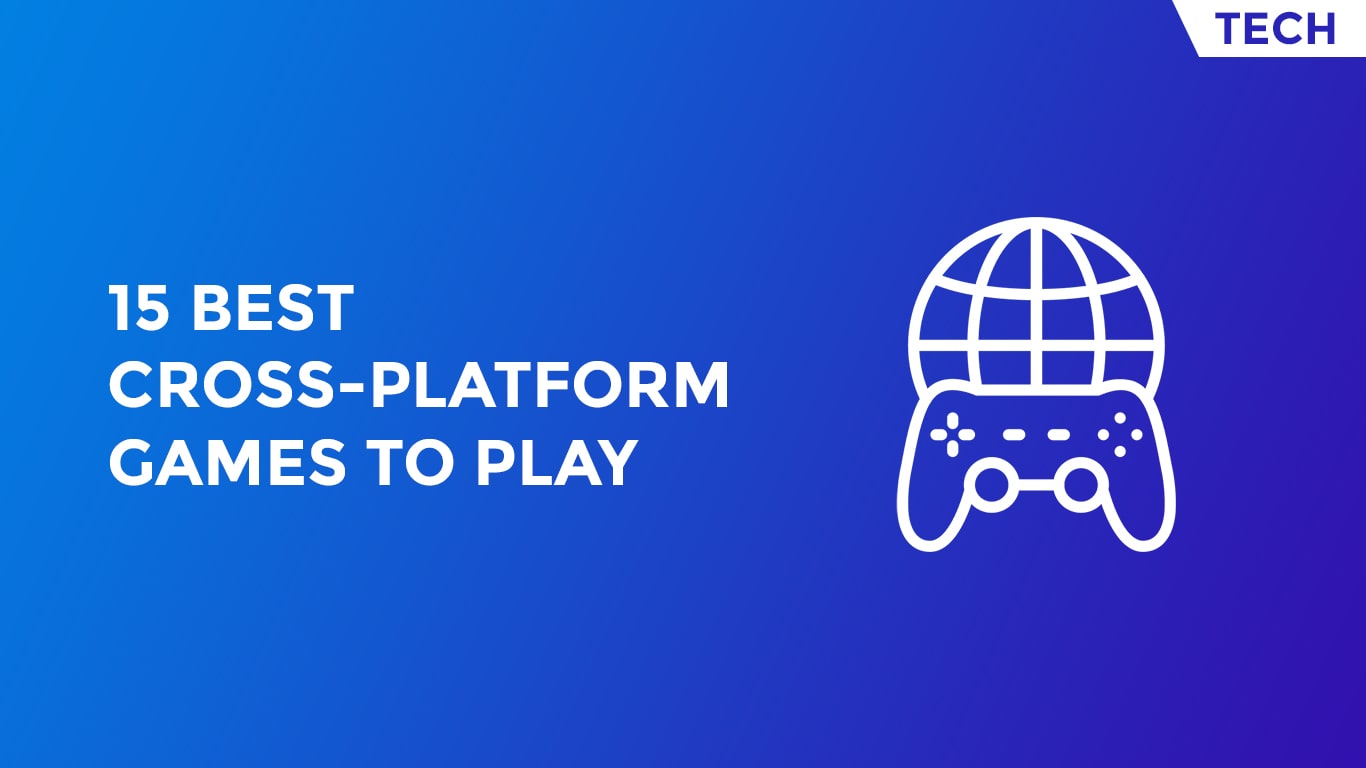 Cross platform games look like an obvious future for gaming. Playing together with friends is what maximum people would like and is also the main factor in the winning of many multiplayer games. However, this is possible only when the games support cross-platform play between the platforms your friends may own.

What Are Cross Platform Games?

The term “cross-platform games” in simple words means playing together in a single game where the players can play on different gaming platforms- consoles, pc, and smartphones.

If you got a PS 4 and your friends on Xbox One or Nintendo Switch, you all can play together in the same game i.e on different platforms. Though not all cross-platform games bind every platform as some support partially and some entirely.

So here’s an overview of the best 15 cross-platform games.

Minecraft is one the most popular games with an average of a hundred million monthly active users. Players build items from scratch with the materials they collect from the world around them.

It’s more appealing and adventurous as an open-world game with no specific goals to accomplish and can go anywhere in the game at any time.

A game where our creativity will turn blocks into whatever we want them to be. Building with friends is such a great joy and Minecraft supports cross-platform though not on every platform.

Everyone knows how popular Fortnite is. Why is it so popular? Yes, because it’s free, available on a huge range of devices like PS 4, Nintendo Switch, Xbox One, PC, Mac, and Android devices also.

The gameplay is attractively designed and has weekly updates and rewards. It’s a multiplatform game where players individually or in squads compete with each other.

We all are aware that Call Of Duty is one of the most successful franchises in gaming. It’s a soft rebooted version and gives you a prequel of cod 4 Modern Warfare.

The vast selection of weapons and their attachments are amazing. Its multiplayer experience is quite different from other games as it added various ways of new maps and more guns to it.

Call Of Duty Modern Warfare is a first-person shooter video game and looks more realistic and has modern settings. There is no surprise that call of duty also supports Cross-Platform.

Rocket League doesn’t have as much following as Call of Duty or some other game but it is the first truly cross-platform game. It’s a game where players use rocket-powered cars to score goals.

The game is a blend of car racing and football. If you don’t love soccer then you have other options like ice hockey, basketball modes in the game as well. One can also add various stunts to your car to increase the level of excitement.

Smite is one of the best cross-platform games. It is a freeware multiplayer online battle arena(MOBA), a third-person perspective video game. Players play the roles of mythological figures such as gods and goddesses from Chinese, Greek, Mayan, Slavic, Egypt, etc.

Smite’s third-person design changes things significantly as one will get the feel of action-packed role-playing games (RPG).

Need for speed: heat is an open world racing video game where the street racers going up against cops cannot be missed and that your activities are governed Day and night. one can earn money during the day and reputation points at night to keep cops away.

Even though it’s based on arcade racing the game still demands a racer’s touch. Heat does a decent job by balancing numerous factors to keep the racing flow exciting enough and yes it is also one of the cross-platform games.

Among us is a multiplayer Space themed social deduction video game. In this game, players can play as a crewmate or an imposter.

The imposter should kill the crewmate while pretending to do daily tasks given to them and if a body is discovered then a crewmate can call a meeting to interact with another player to identify the imposter among them.

This one doesn’t require any introduction, as it is one of the most popular epic Battle Royale Multiplayer Video games and earned way more hype from 2019. Players can choose to play as a solo, duo, or team and they should survive on the map until the end to win the match.

There are many weapons provided that give you a tremendous feeling. Players can customize their character, weapon, and vehicles. It is a great game as the graphics of the game are realistic.

If you are a long-time CCG player then you are gonna love Hearthstone. It’s a turn-based strategy card game. One can play without spending a single dime and still have fun although if you want more cards faster then you have to spend some money.

Players get cards depicting spells, characters, and abilities with which they can build a deck of 30 and defeat opponents with superior card values.

It was developed by Capcom and Dimps and is the most robust version of the famous fighting game. There are over 200 costumes, 34 stages, and 40 characters fully action-packed. V-Skill II gives more options and depth to combat gameplay. There are casual and ranked matches with other players and also extra battle challenges to win rewards.

Chess is among the oldest games and is still played by millions worldwide. Chess Ultra’s graphical aesthetics are remarkable because of HD resolutions and is one of the best chess games in the online gaming market.

It also has some relaxing, orchestral music for players and numerous other features. Rip Stone’s Chess Ultra is pure chess at its core. One can play with their friends or strangers.

Trailblazers is a racing video game where you will get a bonus for painting the tracks as you race and helping your friends. It has an interesting track design with local and online multiplayer capabilities. You will have 8 different vehicles to choose from each having different stats and capacities.

The name itself gives the vibes of pirates. Yes, it offers the essential pirate experience from sailing and quarreling to exploring and looting. This game is honestly fun to play especially with your friends however, one can play solo with a small ship or jump in with friends.

It’s an adventurous game with stunning cartoon visuals and bags of potential. Contrary to Fortnite or Player Unknown’s BattleGround, here it’s about larking/ making mischief with your friends rather than knocking your way out to be on top of the leaderboard.

War Thunder is yet another of the best cross-platform games available for free. It was developed by Gaijin Entertainment and is a Massively Multiplayer Online(MMO)combat flight simulator. War Thunder lets you experience what it is like to pilot ships, armored vehicles, aircraft from the war zones mainly from the WW2 period.

Since the game is largely simulation-based, full real battles are the most realistic simulation of the battle war Thunder offers. There are a considerable variety of weapons and combat conditions.

Flying through space and firing laser cannons, shooting missiles is sensational and this is what Eve: Valkyrie offers you- space and virtual reality. Valkyrie’s seated play area makes you feel more like a pilot in a spacecraft with a plethora of content and enemies to blow up with strong weapons.

What Are The Limitations Of Cross-Platform Games?

The ability to play with other gamers on different platforms may seem an incredible feature nevertheless, it also has flaws. So let’s look at a few limitations cross-platform games pose.

Hardware capacities may cause server restrictions and console players will not have performance speedy as high-end computers which gives PC players an edge. Mouse and keyboard have advantages over handheld controllers but racing and fighting games are simpler with controllers.

Policies shared between developers and players using online services may differ which results in content that can be shared between the platform changes and that’s a huge shortcoming for players.

Programmers should make sure that everything works fine in terms of coding, inputs, etc and it also costs more to port your games to varied systems which is why many companies prefer their games to be played on the hardware it was formulated for. Though Sony or Microsoft kind of companies can still invest and experiment.

These are some of the best cross platform games to enjoy along with your friends.

We have briefly explained what the games are about and which cross platforms do they support. Hope this article has been productive for you and do let us know what are cross-platform games you love to play.