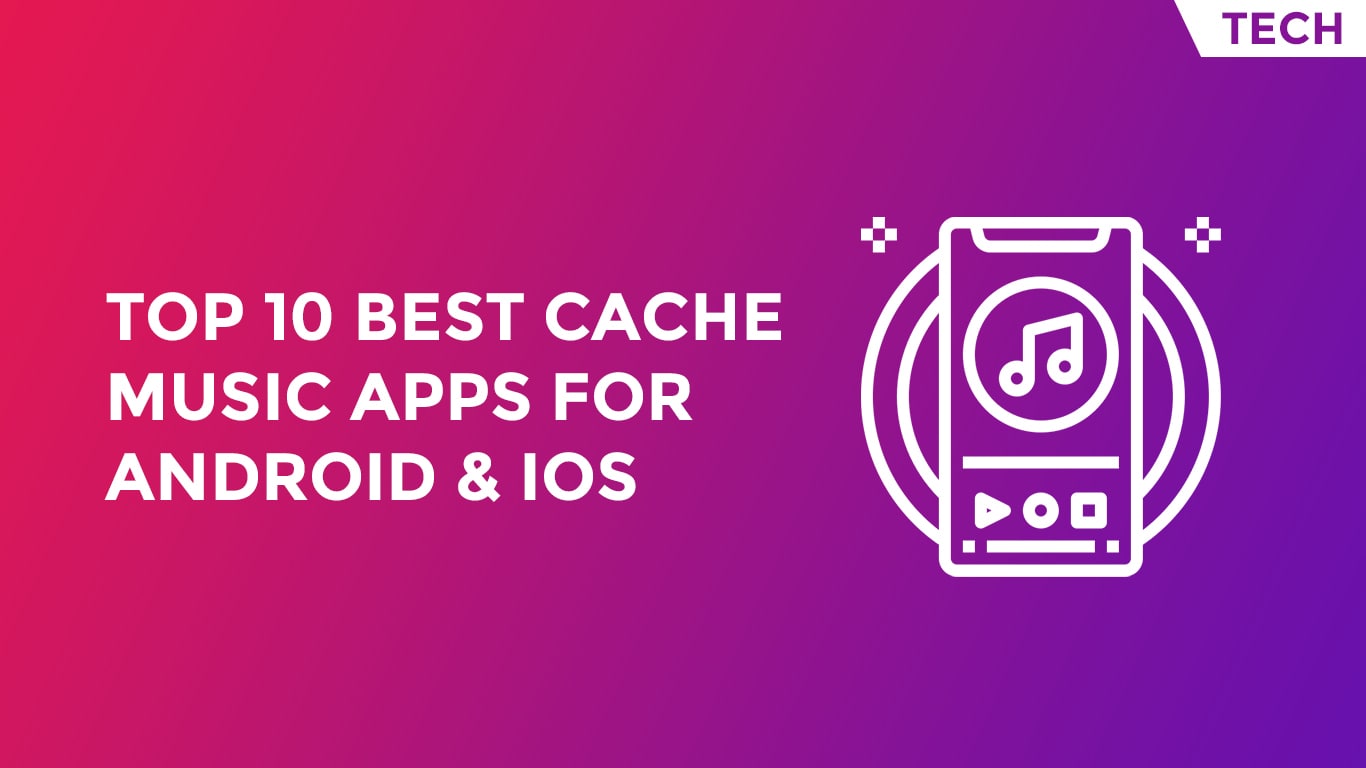 So who doesn’t listen to songs? Whether in solitude or gathering, sad or happy,  Music is what everyone craves.

People love listening to their favorite songs. Music refreshes your memories, elevates your mood, and makes you more cheerful. Even after a tiresome day pleasant music can be relaxing.

We should first know what cache means. A cache is a small storage area on your device which stores data temporarily and is used for quicker retrieval of data. So whenever you listen to songs online the player stores its metadata in the cache so that next time, you get that song quickly with not much processing.

What Are Cache Music Apps?

Imagine, your internet speed isn’t well and troubling you… above that, you are traveling. I guess you are getting my point here.? How irritating it would be not being able to listen to your favorite songs.

This is where music caching apps come into action.

It means when you stream your music/songs, some of its data is stored in the device’s memory for later use, which we call cache data. This will help you retrieve that data quicker even when your internet’s slow, in this case, songs.

Simply said, songs are stored and can be easily fetched for future use. In simple words, these are music apps that cache songs.

That’s why people use offline applications which these days offer several features. You don’t have to worry about data, WiFi, or downloading.

Let’s check out some of the best cache music apps.

Spotify is one of the most popular music streaming services launched in 2008. This platform is in fact 2nd most popular after pandora.

One can find millions of songs from various genres, artists. Classical music to indie rock, top 50 pops to movie soundtracks. You will have instant access to its vast library of music and podcasts. It’s legal and easy to use.

You will find plenty of music of your choice and it doesn’t disappoint about podcasts content too. Spotify is investing great in purchasing podcast networks. You will see podcasts of tech discussions, general knowledge, crime stories, and many more interesting ones…

The best thing about Spotify is that it’s completely free that grants you a huge catalog of music and podcasts. Still, it has few shortcomings like you will have frequent ads, limited to few song skips, and a little lower audio quality at 160kbit/s.

Ever thought of posting original music or recording a podcast? then SoundCloud gives you an effortless way to get started.

It’s one of the world’s biggest open audio platforms with 190 million tracks in over 190 countries. Here you can upload your sounds publicly or privately selecting the persons you want.

One can also save their favorite tracks and playlists for future listening. Yes, you can download tracks but not all of them as artists can enable or disable downloads.

So the basic version is free and users can upload 3 hours of audio, safely store it, and can listen to over 120million tracks.

Unlike others, iHeartRadio is a free radio-style streaming service. Its list has over 15 million songs, 20 genre stations with more than 400,000 artists and streams live free radio from across the globe.

iHeartRadio also has news articles and event listings. However, I must say it needs to enhance its visuals and make it a little attractive.

Just like Spotify, iHeartRadio also has some solid podcast content worth listening to. iHeartRadio tries to be a site where there’s something for everyone to listen to. This will always keep you on if you are more into live radio. It offers two premium plans

Whooshi is one of the best music caching apps. This one has all that you want in music players. It’s the first music cloud app that cuts sound as per your ears’ sensitivity. Wooshi has some charming sound effects which you will really wanna try once.

One can add, delete, and alter their playlists and sort media library. You can also save disc space and listen to no WiFi music stored in GoogleDrive or Dropbox. It’s available on both Android and iOS.

Google play music is one of the most popular music streaming services. It was launched in 2013 and will give access to over 40 million songs. Users can also upload their music around 50,000 which will be added to their library and can be streamed.

Shazam is an app that will allow you to recognize music by only pressing a button and used by more than 100 million people. Guess you are somewhere out and there’s a song playing behind you, you don’t know which song it is.

Now you only have to take out your phone and Shazam it and know all the details of that song. With its offline mode you can identify the song wherever you are, the moment you are online the identified song will come up at the top.

Apart from song identification, it offers many other features such as view lyrics and YouTube videos for all the songs you Shazam.

With auto Shazam it recognizes songs in the background when you leave the app, can preview songs with Apple Music then you will be able to add them to your Spotify playlist and Apple Music.

When it comes to music streaming apps, one of the most popular apps that are always in talks is Pandora. With Pandora, you will have access to 30million songs. It offers free and premium services.

Like all other apps, you will have ads in the free version and cannot skip more than 6 songs per hour. Because of Pandora’s Music Genome’s project data, based on the music you already like, you will find songs similar to that.

One can also create their playlists. It’s available on various devices like Mac, PC, Android, iOS, etc. However only people who live in the US, Australia, and New Zealand can play it, not the rest of the world. It also offers a free trial for 30 days of Pandora premium for those who want to try it.

Apple Music is yet another music streaming service that boasts access to around 60 million songs. One can combine previously purchased songs on iTunes with Apple Music as it integrates with your existing cloud.

You will find genre-based radio stations along with curated Beats 1 radio station. Apple doesn’t believe that an algorithm can understand which songs will you like, so most playlists are created and recommended by Apple Music editors based on your listening.

You can either stream or download for offline play. Apple Music is available in over 100 countries. However, unlike other apps, you will have to buy one of its paid subscriptions. There’s a free trial for 3 months.

Wynk Music is quite a famous and familiar app among Indians as it was developed by giant network operator Airtel. You will find a vast range of songs mainly focusing on the Indian audience.

It keeps you updated whether it’s English music or Indian. One will find various genres such as romantic, bhangra, retro, Bollywood, pop, etc in different regional languages. It’s one of the best music apps for Indian music fans.

Microsoft Groove mainly started for Windows phones but as the windows phone period ended, Microsoft widened to other ecosystems. You can upload your local music to Microsoft  OneDrive and listen wherever you want or listen to a locally stored MP3 library.

You will have access to 40 million songs. It’s easy to use and has decent sound quality. However, there’s no decent way of listening to music like others as it only lets you listen to snippets of songs.

This is yet another cache music app that gives you the best audio entertainment. You can sign up for free on Deezer and you will not have to pay anything. One will find songs, music, podcasts, and radio here.

Deezer has almost all the basic built-in features to use and millions of songs and podcasts to listen to. Moreover, you can access this application from any of your devices.

The app also gives you suggestions based on your listening with the help of AI furnishing you with discoveries that suit your moods.

You can also download the music to listen offline. It has over 90 million tracks which you can listen to and create your own music library and find trending albums, new releases, etc regularly.

Now, this site is also a pretty good cache music app and has around 80+ million tracks along with exclusive music to listen to.

The best thing is it is ad-free and not only does it have the best tracks but also tons of podcasts and interviews, music videos. One can listen anywhere whether offline or online.

Tidal also presents you with personalized duration based on your listening and you can also discover new music. One can find around 350,000 music videos, live streams, events, etc here which are of high quality.

The site is even awarded as the best music streaming service from 2015-21 and it calls itself the best compilation of sound quality, music selection, and usability.

These were some of the best cache music apps. You can choose anyone as each one is best in its way. These music apps will surely turn your mood on and delight you. Hope you liked this article and do let us know which app do you use and why in the comment box.

Also Read: Fix: The Spotify Application Is Not Responding (5 Solutions)