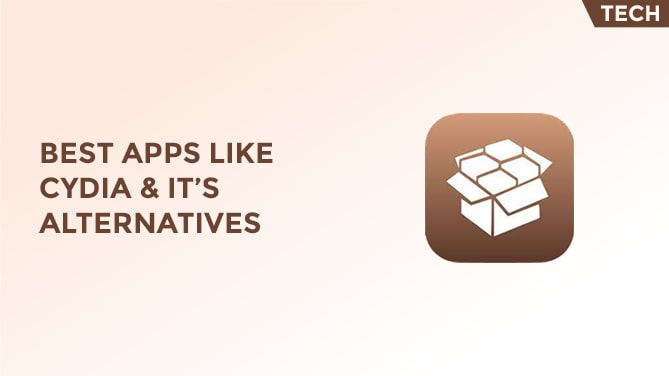 Since you are here looking for the best apps like Cydia and its alternatives, I suppose you have jailbroken your device and know very well about Cydia.

Cydia paves the way to customize your device and provides access to all the unofficial and modified apps after jailbreaking.

Nevertheless, if you are a newbie, that’s all right. We have briefly explained what it is and why we are looking for its alternatives.

Cydia is an alternative AppStore for iOS devices developed by Jay Freeman or Saurik.

However, this app isn’t available on your AppStore. And only after the jailbreak of your device, you will have access to Cydia.

If you are an iOS user for a significant time you must be realizing that AppStore doesn’t offer all the apps and games you may search for.

Therefore, with Cydia, you get access to some incredible third-party apps, tweaks, emulators, extensions, games, modified apps, etc. Also, the paid apps in the AppStore for free.

It has everything so that you can customize your iPhone, iPod touch, or iPad. One cannot download Cydia directly from the internet or App Store. So to download Cydia, you have to choose a specific jailbreaking tool like Pangu, Electra, Saigon, etc based on your iOS version.

However, it’s now officially shut down and that’s the reason people are in search of its alternatives.

We are now aware of why we are looking for apps like Cydia.

Therefore in this article, we have composed a list of apps like Cydia, most of which do not require you to jailbreak your device and hence no interference with the iOS system.

Let’s get started with no more delay.

On our list of apps like Cydia, we first have Tweakbox that is popular enough and the best alternative to Cydia.

It’s a third-party app and is an unofficial app store. You don’t have to jailbreak your iPhone or iOS device, unlike Cydia. It has a user-friendly interface and is easy to download.

It has a huge database and you will find almost everything here. Like Cydia tweaks, emulators, official iOS apps and games (both free and paid), tweaked apps, modified games, etc.

This app is regularly updated and if any technical limitation comes they overcome it quickly and it’s completely safe.

It’s a highly recommended installer if you are looking for an alternative for Cydia.

Emus4u is another popular alternative to Cydia. Just like Tweakbox, Emus4u also has a few simple steps to download and is very easy to use.

It’s reliable and safe though there are a couple of errors that may occur; nonetheless, they are easy to sort out.

Mojo Installer also doesn’t require you to jailbreak your iOS device. So this one’s again a third-party app and is among the best apps like Cydia.

You should have the iOS version above iOS 7+ to download this. It is easy to navigate and has a user-friendly interface. Furthermore, it has a quick search tool, many inbuilt features along with 5 languages to translate.

It offers all the modified apps like Spotify++, Snapchat++, emulators, games, paid and free apps from the app store. Moreover, once you install mojo Installer you don’t need WiFi or internet to download the apps or games. It is also safe and secure.

It was once known as “iNoCydia”. iNoJB’s user-friendly interface and greater functionality will certainly attract you to download it and yes, you don’t have to jailbreak here too.

You can download Cydia tweaks, games, third-party programs, any apps from the app store that are both paid and free, and emulators. You also don’t need a PC, Mac, or Linux to download it.

Nevertheless, the number of apps iNoJB offers is quite less than Cydia, still, it’s a good place to search for as you will find many never-seen-before ones.

There are several apps like Cydia and CokerNutX is another among them and is a new one. Here also, you will find a diverse range of apps and games.

Of course, you aren’t gonna jailbreak here also like the above apps and another good thing is CokerNutX has no geo-restrictions. Also, the user interface is nice and easy to use.

Yes, it’s completely free but you must be using iOS 8 or above.

So, this one’s also one of the best apps like AppEven and supports iOS 9 or above. There’s no jailbreaking, easy-to-use user interface- almost like AppStore. Can also be used with Android devices and doesn’t need any rooting.

You can download all the unofficial apps at high speed. It’s entirely free and you will get to download tweaked apps, emulators, modified apps and games, and the premium ones at no cost.

It is compatible with iOS 9 and above. AppEven is safe to use as the apps and games are checked and tested.

Note: The app is discontinued by its developer and hence isn’t working now, however, its users can download other free apps like Panda Helper, AppValley, or Emus4u

Unlike the above apps, Sileo requires you to jailbreak your device and completely replaces Cydia.

It loads faster than Cydia and has a user-friendly interface. The jailbreak can be done only on 64bit devices on iOS 11 or above.

The procedure for how to download the Sileo app is given in this article. There’s no need for tweaking as all the Cydia repos are compatible with Sileo.

However, tweaks that don’t support are removed which may cause troubles to the developers or testers. Nevertheless, its pros are far more than cons that make it a good replacement for Cydia or apps like Cydia.

Panda Helper is also one of the best apps like Cydia which is free to download and works for both Android and iOS and doesn’t require jailbreaking.

It’s easy to download and simple to use. What does it offer? Tweaked apps, AppStore apps, exclusive or apps that are not found in the official AppStore like emulators, screen recorders, etc, and modified games.

With plenty of features and high-speed downloads- being completely free and no jailbreaking it’s worth checking out.

In the list of apps like Cydia, we now have Asterix Installer. Yeah, this one also doesn’t ask you to jailbreak your device.

It’s a third-party unofficial installer that can be downloaded pretty easily if you have already downloaded another one before.

It’s available in Russian and English languages however, you can easily translate it if you wish.

Being in the last spot doesn’t make it any less- Zestia Step is another great alternative to Cydia or is certainly among the best apps like Cydia.

Like the above apps, Zestia Step also lets you enjoy the benefits of jailbreak without actually jailbreaking and getting in trouble.

Supports iOS 10 and above and was earlier known as X-Cydia. Zestia allows you to download AppStore’s paid and free games, and apps, Cydia tweaks, hacked games, etc.

It also has a user-friendly interface. Furthermore, the download and installation process is simple. Of course, it’s free and updates its database regularly to avoid errors and revoked apps.

Although Cydia is dead, we still have many of its alternatives, though one may not fill its space thoroughly and may take a little more time for that. You can mix a couple of these apps and enjoy all the features you want to.

Let us know how your experience was and which ones your favorite, also any questions regarding the same.